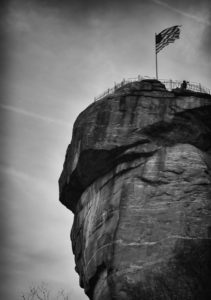 Chimney Rock at Chimney Rock State Park invites guests to escape the ordinary and capture the extraordinary on film.

In April and May, guests are encouraged to snap photos of children at play, flowers blooming, animals scurrying and all the natural wonders of the Park for the Seasons of Chimney Rock Spring Photo Contest.

Every day at the Park creates some unique expressions and interesting finds for shutterbugs. Whether you’re interested in photographing children amazed by the Park’s many critters, adults celebrating their first full trip to the top of the Chimney or an amazing peach-colored sky over Lake Lure, there’s truly endless opportunities to capture the essence of the Park in a photograph.

Second place winners will receive a Chimney Rock Prize Package that features two passes to the Park, lunch for two at the Old Rock Café and two tickets to Lake Lure Boat Tours.

People’s Choice Award winners will have their photo featured as Chimney Rock’s Facebook cover photo for two weeks and on the cover of the Park’s Pinterest board of spring photos. Prizes include two Park admission tickets, lunch for two at the Old Rock Café and a $20 gift certificate for Old Time Photo in Chimney Rock Village.

There is no additional fee to enter the contest. All photographs must be taken  within  the Chimney Rock section of  Chimney Rock State Park between March 1 and  May 31, 2017. The contest is open to amateur and professional photographers. Additional Photo Contest rules are listed at chimneyrockpark.com/event/spring-photo-contest-give-best-shot/.

All spring contest entries are due by Wednesday, May 31, at 5 p.m.

A winner for the spring contest will be announced at Chimneyrockpark.com and on the Park’s social media channels later in June.