Construction Projects Get Closer to Completion 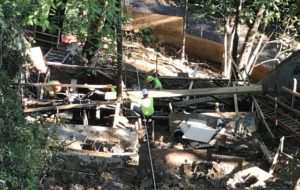 You’ve probably heard there’s been a lot of construction at Chimney Rock at Chimney Rock State Park this year. The good news is, there is a light—or we should say soon-to-be-running elevator—at the end of the tunnel, not to mention a plethora of other newly-constructed features to enjoy.

In the Spring of 2017, state contractors began working on several projects. Crevice Pass, which lets guests meander between two large boulders on their way to the Outcroppings trail, was the first project completed in May. It served as an alternative route to the Chimney while work was being done to demolish and build a new, larger deck at the Gneiss Cave area.

Now that the deck is complete and reopened, the Park has plenty of space where guests can enjoy picnics and educational programs.

Work on the connector stairs leading from the upper parking lot to the Hickory Nut Falls trail is currently underway and expected to be finished later this year.

Last, but certainly not least on state contractor’s list of projects is work to bring the Park’s elevator back to life. In June, the elevator’s original 1948 motor and other essential parts were removed by Erickson Aviation using an S64-F Helicopter.

Since then workers have been in the shaft and on the ground working to bring the elevator back into service.  Work will continue through the fall and contractors are hopeful that the elevator will be back in operation by the end of this year.

Check chimneyrockpark.com and facebook.com/chimneyrockparknc for the latest elevator news.  You may even know the elevator is up and running before we post it online, since you’ll hear the whole Park scream with joy when the state   tells us it’s time to start operating it again.