Beyond the fire: Park sees regeneration after wildfire 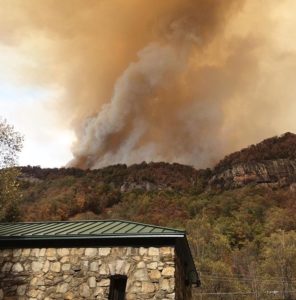 Last November’s Party Rock Wildfire is something all of us in the area will never forget.

Flames charred around 7200 acres during the blaze. Luckily, the Chimney Rock section of the Park was never directly affected by the fire, which burned 2,489 acres of state park land.

Although the Park and areas surrounding it were evacuated for two weeks, we were blessed that no one was severely injured and no structures were lost.

Today, very few physical signs of the blaze remain on the landscape. In fact, North Carolina State Parks report that the removal of undergrowth by the flames will help trees grow larger and stronger over the next few years.

Some of our  guests have expressed concern about returning to the area due to the fire. Not only is the Park open as usual, but the Village is, too. While you’re in Chimney Rock, we encourage you to visit the shops and restaurants that were affected by fire evacuations. Being a patron is the best way you can support locally-owned businesses affected by the wildfire.